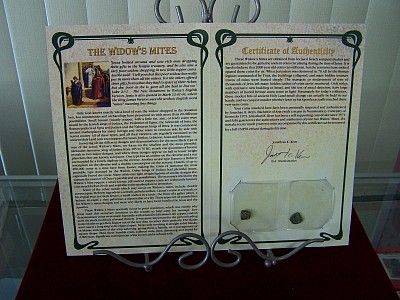 Jesus set over against the treasury and beheld how the people cast money into the treasury, and many that were rich cast in much. There came a certain poor widow and she threw in two mites, which make half a farthing and He called unto his disciples and saith unto them," Verily I say unto you, that this poor widow hast cast more in then all they which have cast into the treasury. For all they did cast of their abundance; but she of her want did cast in all she had."MARK 12: 41-42

There are two distinctive different yet similar coins referred to as “widow’s mites”. These are the smaller lepton and the larger prutahs minted under Alexander Jannaeus, King and High Priest of Israel from 103-76 BC. So what is the difference between these two yet similar coins?

The smaller leptons were the coins used by the poor widow referred to in scripture. The word “mite” is the 1611 King James Version translation for this famous coin. The original Greek language used the word lepton (λεπτον). These leptons were the smallest and lowest denomination coin that circulated in Jerusalem during Christ’s lifetime. Most leptons were thin and were carelessly and crudely struck, usually off center and in small flans. Legends are generally unreadable. Actual sizes of these coins were about the size of a pencil eraser or larger. The values of the coins were based on combined weight with other coins and not on an individual coin value. They are believed to be the coins that were referred to in the Biblical story of the poor widow.

When looking through hoard quantities of these mites, one will usually find both prutah and lepton coins intermixed, the same as you will find pennies, nickels, dimes and quarters intermixed today. So while scripture references only the lepton, due to the commonalities of these two coins, both coins today are usually and commonly referred to as widow's mites.
Coin Markings

The ANCHOR: The anchor was adopted from the Seleucids, who used it to symbolize their naval strength. Anchors are depicted upside down, as they would be seen hung on the side of a boat ready for use.

The STAR (Wheel): The star or star with diadem symbolizes heaven. Some prutah mites stars look more like wheels, and there is some debate as to whether that was meant to be a wheel or a star.